Antennal morphology and sensillar equipment provide data for the first phylogenetic hypothesis of horse stomach bot flies and shed light on their evolution. 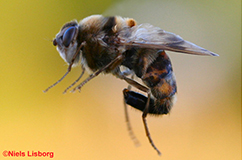 Horse stomach bot flies -- species of the genus Gasterophilus -- are highly specialised parasites with larvae developing in the intestinal tract of horses, zebras, and asses. Adult flies are extremely short-lived, and within the first few days after they emerge from the pupa, the adults have to mate and find a suitable host for the eggs.

A study published in Science Reports documents the sensory equipment of the antennae of adult horse stomach bot flies and put this into an evolutionary context. Features drawn from general antennal morphology and the complex ultrastructure of their sensilla were subjected to a parsimony-based phylogenetic analysis to provide a reconstruction of the evolutionary tree for the species involved.

Based on the phylogenetic tree, the first evolutionary scenario on the biological differentiation of the flies hypothesizes that increasing specialisation in the oviposition behaviour is one of the driving forces behind their diversification. 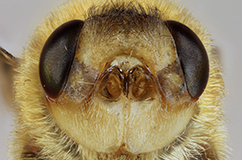 The antennae of parasitic insects are the primary sense organs for localising hosts at a distance, and although horse stomach bot fly antennae are quite small as compared to those of many other flies, they are richly equipped with sensory sensilla.The phylogenetically basal species G. pecorum has only six types of sensilla, while all other species of Gasterophilus have seven types.

This may relate to the reproductive biology, with females of G. pecorum depositing eggs indiscriminately on grass blades in front of grazing hosts, while each of the remaining species of Gasterophilus targets specific areas on their host for oviposition, darting at the host to precisely glue individual eggs on single hair straws.

In quest of the causes for host shifts