Thomas Pape from the Natural History Museum of Denmark was recently elected as President of the International Commission on Zoological Nomenclature (ICZN), a global organisation which advises and arbitrates on the standardisation of scientific names of animals. 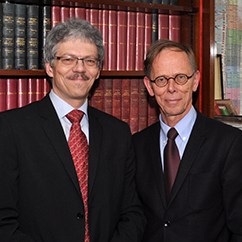 Thomas Pape (left) took over the responsibilities as President from Dr Jan van Tol, during a meeting in London on 16 March 2016.

Thomas took over the responsibilities as President from Dr Jan van Tol (Naturalis, Leiden), during a meeting in London on 16 March 2016.

The ongoing changes in the way scientific information is made public, and in particular the increasing dissemination of scientific data through the internet, represent considerable challenges for the ICZN in defining the conditions and criteria for when a new name can be considered as 'validly proposed".

Add to that the fact that more than15.000 new species of animals and hundreds of new genera are named every year by the worldwide community of professional as well as self-taught taxonomists.

ZooBank, a global registry for animal names, is currently in its first few years of implementation but will hopefully be the core instrument in the way we deal with animal names.