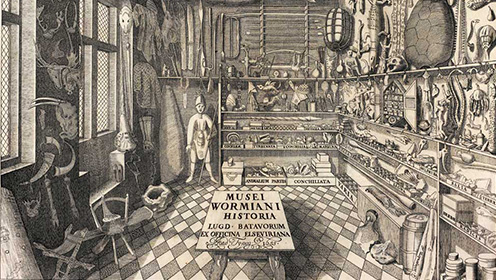 The history of the museum

Although the Natural History Museum of Denmark is a relatively new organisation, the museum's history can be traced back to the 17th century.  In the middle of the 17th century, the physician Ole Worm (1588-1654)  created the Museum Wormianum, which consisted mainly of a wide-ranging collection of natural specimens: stuffed animals, dried plants and rocks and minerals from all over the world. Museum Wormianum formed together with the Royal Kunstkammer the nucleus of what later became the Geological Museum and the Zoological Museum.

To this day the Museum Wormianum is not only regarded as the first museum of Denmark, but of the world. It held many strange objects, one of which can still be found today at the Zoological Museum: an oak root (mounted upside down) grown around the lower jaw of a horse.

In 1621 Ole Worm also became the director of the Botanical Garden, which at that time had been quite neglected. Here he established a large variety of medicinal plants as well as introducing rare species from abroad.

The present Zoological Museum was established in 1862 as a merger of the Royal Kunstkammer, the Royal Natural History Museum, and the zoological University Museum.

A new, then ultra-modern, building was constructed in Krystalgade to house the new museum. On 2 November 1870, the exhibitions were opened to the public. The building remained the centre of Danish zoology for almost a decade. As the collections grew larger the building in Krystalgade became deficient. Large portions of the collections had to be stored elsewhere and the exhibitions seemed old fashioned.

In 1967 the old museum in Krystalgade was closed to the public. At that time the new exhibitions in the brand new building in the Universitetsparken were already under construction, and in 1970 the new museum was opened to the public.

Apart from the exhibitions, the building in Universitetsparken houses very large scientific collections from all over the world. In addition to the oldest collections and the Danish collections, it contains millions of animal species collected at expeditions throughout the centuries - brought home by people who worked in eg. Greenland or the Virgin Islands.

The museum still collects animal specimens, nowadays mostly marine animals and insects. When it comes to mammals and birds only blood samples and DNA samples are collected. Natural history collections play a major role in our understanding of biodiversity, evolution and population genetics, as well as the environmental consequences of climate changes, use of pesticides, amongst others.

The history of the Geological Museum

The collections of the Geological Museum are rooted in the 17th century Museum Wormianum and the Royal Kunstkammer. The oldest object in the museum is the 218 kg silver specimen from the Kongsberg silver mine in Norway dated 24th August 1666. It is one of the very few objects that can be traced back to the Royal Kunstkammer for certain.

The New Natural Theatre of the University

The Geological Museum opened in 1772 as the "Universitetets Nye Naturaltheater" (The New Natural Theatre of the University) in Nørregade. It remained in this location for 120 years. During this period the collections grew considerably, for example by donations from private and royal collections, e.g. the valuable collections from the Particulaire Mineralcabinet of Christian VIII.

Grev Moltke's Mineralogical Museum of the University of Copenhagen

The Geological Museum at Østervold

In 1893 the museum moved to Østervold where a new building was constructed to accommodate both the Mineralogical Museum and the Chemistry Laboratory of the University of Copenhagen. A few years later the exhibitions were ready to let in visitors. In 1962 the chemists moved out and the geologists took over the entire building at Østervold 5-7.

The present Natural History Museum of Denmark at Østervold

The history of the Botanical Garden

The history of the Botanical Garden dates back to August 2 1600 in Krystalgade in Copenhagen. The garden has developed extensively over the years and has had four different addresses.

The first botanical garden of the University of Copenhagen, Hortus Medicus, was established 2 August 1600, by royal charter and donation on a plot of ground by Skidenstraede (now Krystalgade), that previously belonged to the Zoological Museum. A residence with an adjacent botanical garden plot was also built for one of the professors as a botanical garden.

The botanical garden was at this time a herbal garden intended to support the medical sciences.

The second garden of the University of Copenhagen, Oeders Have, was originally laid out by G. C. Oeder in 1752 north of Frederik's Hospital at the request of Frederik V. Amaliegade divided the garden into two parts, a western part that measured 0.41 hectares, and an unused eastern part that measured 0.91 hectares. The western part, though never completed, was equipped with a greenhouse and opened to the public in 1763.

The German-born Oeder became the Botanical Garden's first director. To emphasise its economic significance, he began work on what was to become Flora Danica, an illustrated work describing all Danish and Norwegian plants.

The garden did not last long, however; the King repurchased it in 1778 and donated a new tract of land for a botanical garden near Charlottenborg.

The garden at Charlottenborg

Plans for the third botanical garden of University of Copenhagen, Charlottenborg Garden, received royal approval on 22 July 1778. The new garden was to have two directors, one chosen by the University and one chosen by the King. The first University appointment to this post was C. F. Rottböll and the first royal appointment was Thomas Holmskjold. In 1817 the foundation of the garden was changed when J.W. Hornemann was appointed director for one united management board for the garden.

Several important milestones were passed during the period of Charlottenborg Garden's existence. In 1770, the first independent botanical posts, such as Botanical Gardener, were created, and in 1778 an associate professor was employed at the garden. The first person to enjoy this professorship was M. Vahl, who played a large part in moving the plants from Oeder's Garden to Charlottenborg Garden and later won distinction for his accounting of the garden's plant collections. With the creation of this post, the foundation was laid for the Office of Plant Taxonomy which has now functioned for over 200 years. Botany became an independent science in Denmark when E. N. Viborg was named Extraordinary Professor in Botany, 29 September 1797.

One more person from this period deserves mention: botanical gardener F. L. Holboell, who tended the garden from 1793 to 1829. It is from his hand that the oldest, handwritten books containing descriptions of the plant collection come. He was also responsible for the many catalogued envelopes of seeds that constitute the seed library he started shortly after his appointment.

The year 1839, which was Hornemann's last as director, saw the introduction of Endlicher's catalogue system (published 1837-40), which was based on a taxonomy of plant families. Plants were thus listed according to Endlicher's generic numbers. This system is today replaced by a computer registry.

J. F. Schouw's tenure as director of the Botanical Garden lasted from 1841 to 1852, during which time he made several significant changes including, for example, the practice of updating and reprinting the seed catalogues each year and the establishment of a new section of the garden devoted to Danish species, 570 in number.

By this time conditions in Charlottenborg Garden had become very cramped, and after 1842 it became increasingly apparent that a move to larger quarters was necessary.

The present Botanical Garden at Østervold

The fourth botanical garden of the University of Copenhagen, Vold Garden, was created in accordance with the Demarcation Laws of 6 July 1867, §4, in which it was determined that an area of up to 11.6 hectares could be set aside for this purpose. After property rights, etc. were negotiated, the government made a provision in the 1871-1872 budget, giving the University 35,000 rigsdaler for the creation of a garden site on the remains of the earthen fortification that until that time had surrounded the city.

Landscape gardener H. Flindt designed the garden's layout and terrain, while Head Gardener Tyge Rothe and brewery owner J. C. Jacobsen planned and supervised greenhouse construction in the years 1872 to 1874. The architect of the Palmhouse was Peter Christian Bønnecke. The greenhouse complex was quite an impressive structure according to the standards of the day, built of cast iron, wood and glass, and it enclosed an area measuring 2400 sq. metres.

The garden was opened to the public on 9 October 1874, 274 years after the founding of the first botanical garden, Hortus Medicus. The garden has since suffered regrettable reductions in area due, in 1904 and 1905, to the building of the Technical University, and in 1955 to 1957, to the building of the Department of Biology. As compensation for the loss of garden area to the Technical University, the Botanical Garden was allowed on 9 October 1905 to lease an area adjacent to the garden that faced S›lvgade from the Municipality of Copenhagen with the provision that through-traffic could gain access to the garden via the main entrance to a gate that opened onto Soelvgade. The new area was designed for the cultivation of annuals and was expanded in 1963. It presently houses one of the garden's special collections. When the Botanic Garden had its centennial celebration in 1974, the Municipality of Copenhagen declared that the Botanic Garden could continue to lease the area indefinitely.

Despite the conservative attitude taken toward altering the garden's historical layout, it has been necessary for practical reasons to make changes of greater and lesser consequence. The growing trees have made it necessary to move the various herb beds to sunny areas where they could also be collectively tended. A system of walking paths has been laid out in order to make gardening and study more efficient. New sections of the garden have been opened up for cultivation in order to create better growth conditions and many of the rockeries have been moved.

In 1975, the old Head Gardener's building was converted into administrative office space and renovation of the palm house complex resulted in the installation of a new central heating station with workshops for the gardeners and a conversion of the engine room in the building complex facing Sølvtorvet to staff rooms, workshops and offices for garden personnel. These new accommodations replace the old ones behind the tropical greenhouse and the burned-out shed. In addition, the caretaker's quarters on Gothersgade have been remodelled and new quarters have been built facing Sølvgade.

Evergreen trees do not thrive in the city, and thus it was decided in 1904 that some parcels of land should be acquired in the Soroe forest district for the purpose of establishing a pinetum and a few smaller arboreta. The total area covered by these arboreta, including the Christiansminde Arboretum which was established in 1971, is about 5.4 hectares.

Botanical research has been conducted since 1874 in connection with the garden's propagation department. This experimental work was moved in 1954 to Albertslund and then to Højbakkegaard in Taastrup. This area was later expanded to encompass 5.4 hectares. In order to protect the garden from the many unfortunate attempts to reduce its size, it was declared a preserved site on 31 January 1977. The present Botanical Garden, as well as areas that may be added in the future, are included in the preservation declaration, thus assuring the Garden's continued existence.