The Geological Museum in Copenhagen now exhibits a big piece of the meteorite that landed in a parking lot in Herlev Saturday night at 22 o’clock on February 6 2016. More meteorite pieces have already been sent for studies in Italy. The museum has received several pieces of meteorite the past few days and can now exhibit one of the biggest pieces from the fall.

The meteorite can be seen at the Geological Museum from Monday February 15  10:00 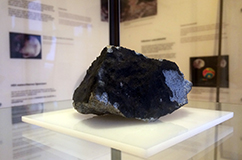 The large meteorite piece weighs 635 grams and is one of the largest fragments of the meteorite, which fell with over 300 km/h in the parking lot in Herlev. The meteorite is a so-called ordinary chondrite. Chondrites consists of stone and metal and are the most common meteorites, approx. 80 percent of the meteorites, one finds, are chondrites. 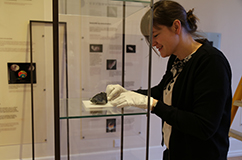 Tuesdays and Thursdays in week 7 and 8 at 12:00-14:00 it is possible to meet one of the museum’s meteorite experts who can answer questions about meteorites and assess if you may have found a meteorite. So bring your findings with you to the museum.