In a new study, a research team headed from the Natural History Museum of Denmark, University of Copenhagen, has shown a direct link between the greatest increase in Phanerozoic marine biodiversity and the onset of a sudden icehouse.

The great increase in biodiversity took place during the geological period known as the Ordovician.

- This was a time in Earth history previously believed to be characterized by extreme CO2 levels. Due to the occurrence of a short-lived ice age towards the end of the Ordovician, this has been viewed by some climate skeptics as proof that fluctuating CO2 levels does not affect climate. Thus, man-made emissions due to the burning of fossil fuels therefore could not facilitate global warming, lead author Christian M. Ø. Rasmussen explains.

- With this new study, that assumption can no longer be supported as we demonstrate clear-cut evidence for glaciations some 30 million years prior to the end Ordovician ice age, he continues. 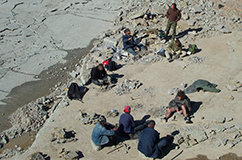 A culmination of a long-term international co-operative effort

Throughout the last 15 years the research team has analyzed a massive palaeontological dataset sampled in the field in western Russia and Estonia. More than 45,000 fossil trilobites and brachiopods were collected in the field and, thus, form the basis for the study.

They are applied to resolve palaeoecological details that reveal fluctuations in past climate. Based on the occurrences and ranges in time of key species within these two animal groups, a statistically supported relative sea level curve is constructed. With this sea level curve the research team demonstrate that sea level fell some 150 meters up though the 11 million years long investigated interval. 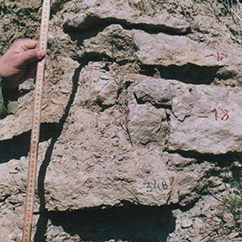 This sea level fall is supported by geochemical evidence based on stable isotope studies on Oxygen and Carbon. By extracting the mineral calcite from the shells of brachiopods collected bed-by-bed and analyzing the relationship between different naturally occurring oxygen isotopes the researchers show that sea bottom temperatures fell at least 5 degree Celsius in the same interval as the sea fall is registered.

Despite being a considerable temperature drop in itself, it is only a minimum estimate. This is because of the fact that the palaeocontinent of Baltica – on which the study area is located – drifted from about 40 degree S to 30 degree S in the interval covered by the study. Thus, Baltica moved at least 1,000 kilometers closer to the equator and thus one would expect ocean water temperatures to increase. However, the opposite is the case. 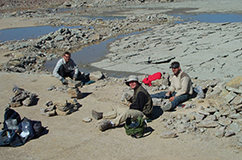 The fossils were systematically collected through 150 limestone and marl beds.Photo: David Harper.

An Ice Age of great importance to biodiversity

The onset of sudden icehouse conditions during the Mid Ordovician was an abrupt change in climate. Prior to this, the Earth was exposed to a prolonged super-greenhouse with sea surface temperatures estimated above 40 degree Celsius. Thus, seriously affecting the ability of life to evolve and diversify. The researchers therefore speculate that the sudden emergence of icehouse conditions brought about fundamental changes in ocean circulation, instigating thermohaline circulation in the oceans.

Today this thermohaline ‘pump’ has a fundamental importance with respect to bioproductivity in the oceans. Thus, back in the Ordovician, an initiation of this pump which circulates warm surface waters with cold bottom waters could have sparked a massive increase in bioproductivity thereby facilitating the Great Ordovician Biodiversification Event.

The super-greenhouse that turned out to be an icehouse

- Our findings demonstrates the onset of icehouse conditions to occur some 30 million years prior to what was previously believed. The Late Ordovician Ice Age is thus no longer an enigmatic paradox in an otherwise prolonged super-greenhouse interval. Rather it was the climax in a prolonged icehouse interval spanning some 30-40 million years – thus representing very similar conditions to what the Earth has witnessed since Oligocene-Miocene times (~30 million years), says Rasmussen and elaborates

- Raging high CO2 levels during the Ordovician can thus no longer be supported. Therefore, the greatest increase in marine biodiversity in Earth history is now associated with icehouse conditions, not as previously believed, extreme greenhouse conditions.

The results have just been published in Nature’s Scientific Reports. The study is the result of a co-operative efforts between University of Copenhagen, Lund University, Durham University and the Russian Academy of Sciences in Moscow.