The evolution of the first land plants including mosses may explain a long-standing mystery of how Earth’s atmosphere became enriched with oxygen, according to a new study published in Proceedings of the National Academy of Sciences.

Oxygen in its current form first appeared in Earth’s atmosphere some 2.4 billion years ago, in an incident known as the Great Oxidation Event. However, it was not until roughly 400 million years ago that this vital compound first approached modern levels in the atmosphere. This shift steered the trajectory of life on Earth and researchers have long debated how oxygen rose to modern concentrations. 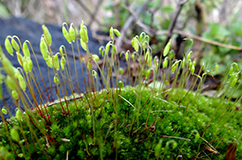 The invasion of plants on land

In a study published in Proceedings of the National Academy of Sciences, an international team of researchers including Professor Tim Lenton, of the University of Exeter, and assistant professor Tais W. Dahl from the Natural History Museum of Denmark theorised that the earliest invasion of plants on land caused a dramatic shift in Earth’s atmospheric O2 levels.
Their emergence and evolution permanently increased the flux of organic carbon into sedimentary rocks, the primary source for atmospheric oxygen, thus driving up oxygen levels in a second oxygenation event and establishing a new, stable oxygen cycle.

Earth’s early plant biosphere consisted of simple bryophytes, such as moss, which are non-vascular – meaning they do not have vein-like systems to conduct water and minerals around the plant. Using computer simulations, the researchers first estimated that these plants could have generated roughly 30% of today’s global terrestrial net primary productivity by about 445 million years ago.

When the properties of modern bryophytes were taken into account, including their elemental composition and effects on rock weathering, they found that modern levels of atmospheric oxygen were achieved by 420 to 400 million years ago, consistent with independent evidence.

These findings therefore suggest that the first land plants, such as the humble moss, created the stable oxygen-rich atmosphere that allowed large, mobile, intelligent animal life, including humans, to evolve.

Professor Tim Lenton, of the University of Exeter, said:

- It’s exciting to think that without the evolution of the humble moss, none of us would be here today. Our research suggests that the earliest land plants were surprisingly productive and caused a major rise in the oxygen content of the Earth’s atmosphere.

- What’s really exciting about our study is that we see a shift in the Earth system driven by simple rootless plants having huge impact on the phosphorous supply to the oceans, productivity worldwide – and ultimately on the oxygenation of
Earth’s atmosphere

The impact of early terrestrial ecosystems came long before rooted plants and the establishments of forests – and long after the appearance of animals on Earth.

The research was funded by the Leverhulme Trust, the Natural Environment Research Council, a Royal Society Wolfson Merit Award, and the VILLUM Foundation.