Danish and Swedish researchers have dated the enormous Hiawatha impact crater, a 31 km-wide meteorite crater buried under a kilometer of Greenlandic ice.

The dating ends speculation that the meteorite impacted after the appearance of humans and opens up a new understanding of Earth’s evolution in the post-dinosaur era.

Ever since 2015, when researchers at the University of Copenhagen’s GLOBE Institute discovered the Hiawatha impact crater in northwestern Greenland, uncertainty about the crater’s age has been the subject of considerable speculation. Could the asteroid have slammed into Earth as recently as 13,000 years ago, when humans had long populated the planet? Could its impact have catalyzed a nearly 1,000-year period of global cooling known as the Younger Dryas?

New analyses performed on grains of sand and rocks from the Hiawatha impact crater by the Natural History Museum of Denmark and the GLOBE Institute at the University of Copenhagen, as well as the Swedish Museum of Natural History in Stockholm, demonstrate that the answer is no. The Hiawatha impact crater is far older. In fact, a new study published in the journal Science Advances today reports its age to be 58 million years old.

"Dating the crater has been a particularly tough nut to crack, so it’s very satisfying that two laboratories in Denmark and Sweden, using different dating methods arrived at the same conclusion. As such, I’m convinced that we’ve determined the crater’s actual age, which is much older than many people once thought," says Michael Storey of the Natural History Museum of Denmark.
"Determining the new age of the crater surprised us all. In the future, it will help us investigate the impact’s possible effect on climate during an important epoch of Earth's history" says Dr. Gavin Kenny of the Swedish Museum of Natural History.
As one of those who helped discover the Hiawatha impact crater in 2015, Professor Nicolaj Krog Larsen of the GLOBE Institute at the University of Copenhagen is pleased that the crater’s exact age is now confirmed.

"It is fantastic to now know its age. We've been working hard to find a way to date the crater since we discovered it seven years ago. Since then, we have been on several field trips to the area to collect samples associated with the Hiawatha impact," says Professor Larsen

Age revealed by laser beams and grains of sand
No kilometer-thick ice sheet draped Northwest Greenland when the Hiawatha asteroid rammed into Earth surface releasing several million times more energy than an atomic bomb. At the time, the Arctic was covered with a temperate rainforest and wildlife abounded – and temperatures of 20 degrees Celsius were the norm. Eight million years earlier, an even larger asteroid struck present-day Mexico, causing the extinction of Earth’s dinosaurs. 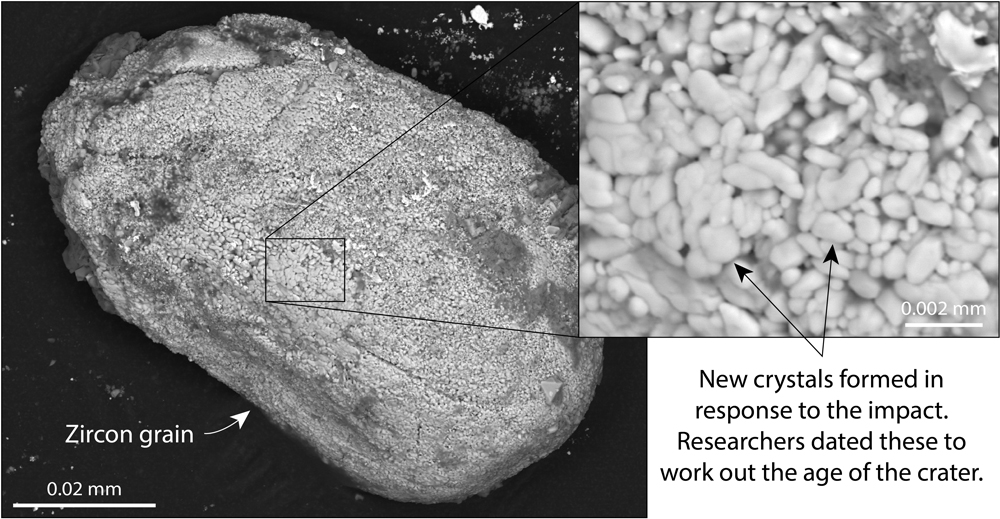 The asteroid smashed into Earth, leaving a thirty-one-kilometer-wide, one-kilometer-deep crater. The crater is big enough to contain the entire city of Washington D.C. Today, the crater lies beneath the Hiawatha Glacier in Northwest Greenland. Rivers flowing from the glacier supplied the researchers with sand and rocks that were superheated by the impact 58 million years ago.
The sand was analyzed at the Natural History Museum of Denmark by heating the grains with a laser until they released argon gas, whereas the rock samples were analyzed at the Swedish Museum of Natural History using uranium-lead dating of the mineral zircon.

Clear evidence that the Hiawatha impact disrupted global climate is still lacking. However, the crater’s dating allows the international research team working on the crater to begin testing various hypotheses to better understand what its impact was on both the local and global climate.