This week, bird ringers from whole of Europe are gathered in Copenhagen to hold the 20th EURING general assembly. EURING was founded in 1963 to coordinate scientific bird ringing across Europe. Bird ringing provides important information about birds and wildlife. The technique was invented by a Dane and has evolved into a standard used all over the world. 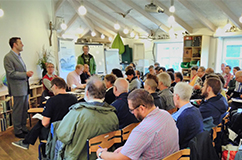 Bird ringers from whole of Europe are gathered in Copenhagen this week to hold the 20th EURING general assembly (Photo: Rien van Wijk)

Copenhagen Bird Ringing Centre (Ringmærkningscentralen) is the host of the general assembly. The Centre is located at the Natural History Museum of Denmark. Director of the museum, Peter C. Kjærgaard, will give the opening speech.

The EURING coordinates scientific bird ringing across Europe and estimates that 115 million birds have been ringed since the beginning of 1900s. Bird ringing provides information about the status of birds. This is important in order to conserve and protect them, but also to understand how environmental changes influence wildlife in general.

”The importance of ringing for our knowledge of bird movements can hardly be underestimated and the use of this simple method continues today. EURING coordinates the efforts of thousands of amateurs across Europe and we are honored to host a meeting discussing the best use of these efforts now and in the future”, says head of Copenhagen Bird Ringing Centre Kasper Thorup.

The General Assembly is held every two years and attended by representatives from member schemes across Europe. Beside formal business, the four-day program includes reports on project results, talks by significant people in the bird ringing society and a field trip to the famous bird migration hotspot, Falsterbo, in Sweden.

It makes good sense to hold the general assembly in Denmark. In 1899, the Dane, schoolteacher Hans Christian Cornelius Mortensen was the first one to release Starlings fitted with metal rings engraved with successive numbers and a return address. Since then, bird ringing has evolved into a standard research technique used all over the world. 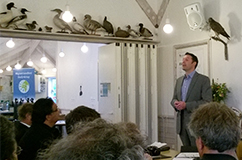 Next year, it is 90 years since ringing started from what is today called the Natural History Museum. The use of amateur ringers and reporting from the public probably makes scientific bird ringing one of the oldest citizen science projects in the world.

Based on data from bird ringing, the National History Museum has published Migration Atlases for Denmark, Faroes and Greenland. EURING is now working to extend similar kind of work to whole of Europe.