A new Danish study shows that crayfish-DNA from freshwater can be used to monitor threatened and invasive species of crayfish in Denmark and Scandinavia. The study that was done by two master students at the Natural History Museum, Copenhagen University has just been published in the scientific journal PLOS ONE. 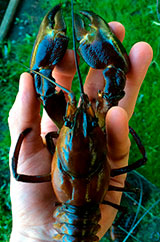 - This result can be used as a quick and cost-efficient management tool for future conservation of crayfish. It is possible to survey a large number of lakes and streams for the presence of crayfish, says Sune Agersnap, their together with William B. Larsen and postdoc Steen W. Knudsen has conducted the study.

Crayfish plays a key role in freshwater habitats and can have a huge effect on theaquatic environment. In Europe the number of invasive crayfish now exceeds the number of native crayfish. In Denmark there are three species of crayfish, the indigenous noble crayfish Astacus astacus and the two invasive species signal crayfish Pacifastacus leniusculus and the narrow-clawed crayfish Astacus leptodactylus. The Narrow-clawed crayfish is also indigenous to Southern Europe, but is perceived invasive outside its natural area.

The study was successful  due to financial support from the Innovation foundation and close collaboration with two Danish companies AmphiConsult and Eurofins as well as  the Norwegian Veterinary Institute in Olso . So now we have published   DNA-systems that can detect which of the 3 crayfish species there are present in a lake, using a water sample.

- That the method is working in the rest of Scandinavia is just perfect because for our neighbors crayfish plays a very important cultural role. Who knows - perhaps these new DNA methods can save the famous Swedish crayfish partes, says Peter Rask Møller, Natural History Museum of Denmark, who has been the project manager. 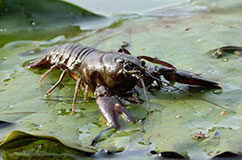 When new crayfish  are introduced to the environment, they do not only threatened  the indigenous crayfish. Crayfish eats everything from plant material, fish eggs and water insects, which makes them capable of changing the ecosystem balance, if there has  been no crayfish before. In addition introduced crayfish can be carriers of crayfish plague, lethal to  European indigenous crayfish species. Thus, crayfish plague is known to have eradicated local populations of crayfish all over Europe.

- If we are to protect the native crayfish species and fight the invasive crayfish species, it’s essential to know where they are and how they spread.In Denmark, however, our substantial knowledge about crayfish distribution is limitedcompared to other European countries. This is where this study, using environmental DNA from crayfish gets really interesting, says Sune Agersnap. 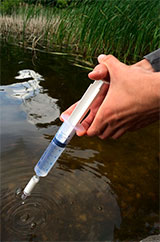 - The discovery of crayfish plague in Denmark makes it important to monitor the distribution of threated and invasive crayfish in Denmark, says Sune Agersnap.


Read the article in PLOS ONE here.