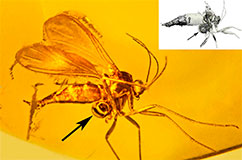 Anther with pollinia (arrow) of Succinanthera baltica gen. nov., sp. nov. attached to the base of the hind leg of a fungus gnat (Diptera; Sciaridae; Bradysia sp.) in Baltic amber. The remainder of the leg is missing, and a droplet of haemolymph at the broken tip suggests that the amputation occurred shortly before the insect became embedded in resin. Scale bar = 1.2 mm. Insert shows the fungus gnat and pollinia viewed using X-ray micro-computed tomography. Arrow shows pollinia. Photo: G. Poinar Jr

Despite being the largest family of flowering plants with more than 25000 species only very few fossils of Orchidaceae have been described, and unambiguous finds have first appeared in the last decade. Orchids distribute their pollen in masses called pollinia which become attached to animal visitors (typically insects); often by means of very complicated mechanisms that has fascinated biologists since Charles Darwin.

Orchid pollinia attached to insect pollinators embedded in amber are exceptional sources of information about orchids from the past but may not always be recognized by collectors and insect specialists. The first orchid pollinia in Caribbean amber (15-20 Million years) were described in 2007 and was used to calibrate a ‘molecular clock’, suggesting a minimum age of the family of 76 Ma, later pushed back to 112 Ma by more refined analyses. This is 47 Ma before the end of the Cretaceous epoch and the demise of the non-avian dinosaurs. 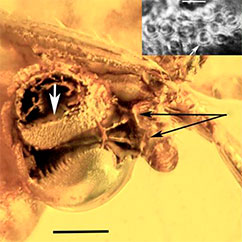 Close up of the anther cap with damaged pollinium and attaching strings seen in the upper part. The lower part is covered by a semitransparent layer of trapped air. Scale bar = 170 μm. Black arrows show attachment to the insects leg. White arrow points position of the insert (close up of pollen, scale bar 48 μm). Photo: G. Poinar Jr

The present find, described as Succinanthera baltica, is from the time where the largest subfamily of orchids (the Epidendroideae with most of the extant species) is supposed to have begun to differentiate into the many subgroups of mainly tropical orchids known today.

The tiny pollinia, still encased in the wall of the detached anther, a phenomenon known as ‘anther cap retention’ are somewhat damaged suggesting a soft fragile structure as seen in present day basal epidendroid orchids.

They are attached with strings of viscid material to a hind leg of a darkwinged fungus gnat (Bradysia sp.), a very old genus which also today pollinate small orchids by capturing pollinia on the legs.

The object carried by the fossil gnat may not be easily recognized as part of an orchid flower by non-orchid specialists so it may be assumed that more fossils of this kind eventually may turn up, perhaps even older. 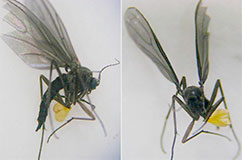 Amber collectors and insect paleontologists are urged to contact specialists in orchid morphology if they find inexplicable structures attached to fossil insects!

Read More in Botanical Journal of the Linnean Society