Insect account for the largest biodiversity and significant part of the biomass here on Earth, but still seem to be poorly understood. This and the fact that we in Europe (and perhaps the World) are facing rapid declines in number of insects is alarming. It is time for a more focused effort towards insect conservation by reversing the current trend, before it is too late. One such study contributing to the knowledge of insects was recently published by authors from the Biosystematics and EvoGenomics sections of the Natural History Museum of Denmark. They find a Danish island to act as genetic reserve for insects, perhaps because of its less intensive use by humans. 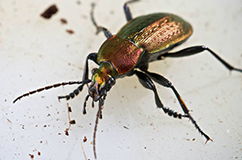 Carabus arcensis that has been investigated in this study. Photo: AKH.

Insects and other animals are rapidly declining in genetic diversity during the Anthropocene (the era of large human influence on the planet). Genetic diversity refers to the overall variation of the gene pool of a species.

Large genetic diversity helps a species overcome rapid changes in the environment or climate. A recent German study has found aerial insects to be rapidly declining in numbers, reporting declines as high as 75% during the last decades.  Such studies indicate a downward trend which is alarming for the insects, for nature and for our own future.

A just published study by researchers of the Biosystematics and EvoGenomics sections of the Natural History Museum of Denmark investigated the genetic diversity of the ground beetle (Carabus arcensis) to better understand the above-mentioned trends. Carabus arcensis mainly thrives in heathland a habitat type which has experienced major changes with a reduction of 80% since the beginning of the 1800s. This has presumably had large consequences for the populations of the beetle, that now is rare in Denmark. 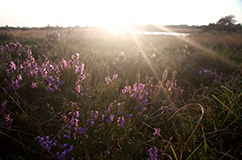 - When looking at the genetic diversity of the different populations of Carabus arcensis we interestingly found the island of Læsø to be acting as a reserve for their diversity. We also found large population sizes on the island as compared to the mainland. Whether this is due to lower impact of humans here or other factors is yet unknown, but we expect that this is one of the reasons, says Aslak Kappel Hansen lead author of the paper and Biosystematics PhD student at the Natural History Museum of Denmark.

In the study 6 populations of Carabus arcensis were sampled across Northern Jutland, Læsø, and Southwestern Sweden. The interesting things about Læsø are that it is only 5000 years old and oceanic, meaning that it was never connected to the mainland and therefore has a very recent fauna. The beetle was even found on Hornfiskrøn a small islet just south of Læsø, which is believed to be no more than a 1000 years old. Whether other islands are able to harbour a similar genetic diversity for rare beetles is yet to be explored.

Carabus arcensis mainly thrives in heathland a habitat type which has experienced major changes with a reduction of 80% since the beginning of the 1800s.

- We believe that islands should be targeted for conservation effort as they represent dynamics different from those on the mainland. This said we shouldn’t neglect mainland habitats, but we believe many islands protect populations of animals that have faced recent rapid declines. Especially this may be true for insects that are reacting to disturbances differently from other animals, such as mammals and birds, says Aslak Kappel Hansen.