Myth busted: No link between gigantic asteroid break-up and rise in biodiversity

Some 470 million years ago, during the middle part of the geological period known as the Ordovician, an asteroid collision took place somewhere between Mars and Jupiter. The collision caused an explosion that sent a cascade of meteorites towards Earth. The heavy bombardment of Earth continued for millions of years, and even today some 20% of all meteorites that reach Earth originate from this asteroid break-up. At the same time the Earth witnessed the greatest rise in marine biodiversity since the origin of multicellular life. So, the question is: was there a connection between these two fundamental events in Earth history, as has been proposed? A new study now demonstrates that the rise in biodiversity commenced long before the asteroid collision.

-The link between these two fundamental events – the so-called Ordovician radiation and the sustained meteorite bombardment – has, for many years, presented a paradox in science. We are used to hearing the story of meteorite impacts that leads to the loss of species richness, such as when the dinosaurs went extinct 65 million years ago. But could the opposite scenario be a possibility as well? asks Assistant Professor Christian M. Ø. Rasmussen from the Natural History Museum of Denmark rhetorically. He is co-authoring the study in which an incidental finding of the rare mineral zircon within the meteorite-bearing rock layers led to an answer to the paradox.

Plus, minus 6 million years

Researchers have long known that the fossil meteorites are lying in rock layers that also witness the great increase in biodiversity, but could only date the asteroid break-up to occur within a time frame of 12 million years. This interval exactly overlaps the initiation of the great biodiversity increase. But, with the lucky finding of zircons in rock layers also containing fossil meteorites, the researchers suddenly had the opportunity to precisely determine when the asteroid collision took place, and thus, whether there was a link to the radiation event, or not. 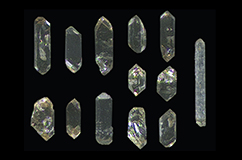 -Zircons are special as they can be used to date rocks. They come from magma chambers in the crust but are extruded onto the Earth’s surface through volcanic eruptions. Thus, if you find zircons in the rock record you can date these zircons and thus get an age for when this eruption took place. In this case, this date would also define a precise age for the fossil meteorites, explains Anders Lindskog from the Geological Department, Lund University, who is the lead-author on the study. He was the one who recovered the zircons when studying the rock layers containing the fossil meteorites and subsequently sent them to the Natural History Museum of Denmark, which has the facilities and experience to conduct high-precision dating of rocks.

Calculating the age of the zircons

In Copenhagen, the zircons were handed over to postdoc Mafalda Costa from Centre for Star and planet Formation (StarPlan) at the Natural History Museum of Denmark, who processed and analyzed the minerals in the radiogenic isotope laboratory at the Geological Museum.

- Zircons occur in a wide variety of rocks, including in ash layers associated with volcanic eruptions. The determination of the age of these crystals is based on the natural radioactivity of uranium, which is incorporated in the mineral upon crystallization, and that from that moment until today, at a known rate, has been spontaneously decaying to lead. We measure the amount of uranium and lead present in the zircons and from that it is possible to calculate an age that pinpoints the time when they erupted on the surface. In this case, on the same surface that also contained meteorites originating from the asteroid break-up. In this way, we could precisely define the age of the fossil meteorites, explains Mafalda Costa, and adds:

- From other isotope analyses of minerals found in the fossil meteorites it had been previously estimated how much time the meteorites spent in space before reaching Earth. Hitherto it was not precisely known when this happened. With our new zircon age, we can determine that the rise in biodiversity occurred ~2.5 million years prior to the asteroid break-up took place.

This new study, which has just been published in the renowned journal Nature Communications, therefore demonstrates that there is no link between the Ordovician rise in biodiversity and the asteroid break-up – thus, some other driver must have facilitated the Ordovician radiation.