How do people choose what plants to use?

FROM MEDICINE TO RITUALS

There are about 400,000 species of plants in the world. Humans use approximately 10-15% of them to cover our basic needs, such as food, medicine and shelter, as well as other needs, such as recreation, art, and craft. But why and how have humans selected only a small fraction of all plants to utilize? A new study published in today’s Nature Plants sheds new light on these questions by investigating how people use palms in South America. The overall conclusion is that people are very selective when it comes to plants used to cover basic needs, but less so when it comes to using plants for needs with no physiological underpinnings. 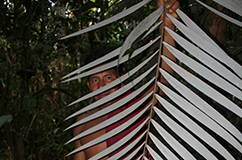 Leaves of Astrocaryum macrocalyx are occasionally used for thatching by the Yucuna people of the Colombian Amazon but abundant species, e.g. Lepidocaryum tenue, are generally preferred. Photo: Rodrigo Cámara-Leret.

We know that certain plant traits, such as taste and scent, can affect how we perceive plants. For example, if a fruit tastes sweet, it is very likely that we will eat it. If the leaves of a plant have a mint-like scent, it is likely that we will use these leaves as herbs or tea.

However, plants come in all shapes and sizes and possess several traits that affect how we think of them, and until now it has been unclear exactly how plant traits determine how we use plants to cover our needs.

- In this study, we investigated how people use palms in South America. We focused on palms because they are very important for local livelihoods in several parts of the world, including South America. We interviewed 2,200 locals from over 60 communities about how they use palms and we collected data on biological traits of these palms, such as plant size (leaves, fruits, stems) and range size. We then tested for the correlation of these traits with the perceived value of the different palm species, says Rodrigo Cámara-Leret from the Royal Botanic Gardens, Kew, and continues 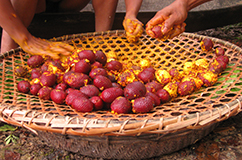 Macuna people of the Colombian Amazon prepare a drink from the fruits of the large fruited and abundant canopy palm Mauritia flexuosa. Photo: Rodrigo Cámara-Leret.

- We found that people tend to use large, widespread species compared to small, narrow-ranged ones. For example, people prefer larger palms for food, potentially because they need palms that produce large quantities of food, rather than ones that are small and produce less.

More importantly, we found that the more basic the human need that a plant covers, the stronger the link with biological traits. Palms used for basic physiological and safety needs (e.g. food, medicine, shelter) have a very strong link to plant size (the bigger, the better) and range size (the more the merrier).

On the other hand, palms used for psychological and self-actualization needs (e.g. rituals, jewelry) are less dependent on the biological traits of palms. In other words, people are very selective when it comes to plants used to cover basic needs, but less so when it comes to using plants for needs with no physiological underpinnings. 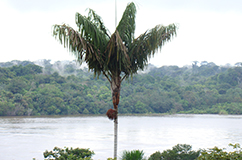 The palm Oenocarpus bacaba with a patchy Amazonian distribution and small fruits is less important to local communities for human food than other abundant and large fruited congeneric species such as Oenocarpus bataua. Photo: Rodrigo Cámara-Leret.

These findings can also have implications about the ways we can utilize wild plants in order to meet societal needs in a changing world with a growing human population.

- Our results suggest that reliance on plant size and availability may have prevented our optimal exploration of the properties of wild plants, since small and rare plants might have been overlooked. These overlooked species might present an untapped natural resource that merits further investigation, says Haris Saslis-Lagoudakis, Assistant Professor at the Natural History Museum of Denmark.