New research documents one of the best preserved fossil birds of the Eocene Epoch. The fossil is approximately 54 millions years old, and lived some 12 million years after the Cretaceous/Paleogene mass extinction event, which is famous for the demise of non-avian dinosaurs. 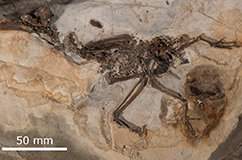 - The new fossil is a nearly complete, three-dimensionally preserved and articulated skeleton, which is extremely rare for fossil birds. Other deposits of that age typically yield disarticulated or flattened specimens. The fossil even preserves soft tissue remains and stomach content, and may constitute one of the World’s best fossil birds, said Dr. Niels Bonde, lecturer emeritus at the Natural History Museum of Denmark.

The work, published today in the journal Scientific Reports, finds that this small bird is the oldest representative of the rollers (Coracii). Living rollers are medium-sized birds with brightly coloured plumage, big heads and stout beaks.

The bird fossil comes from the Early Eocene Fur Formation of Denmark (Mo-Clay), which is a unique offshore marine deposit famous for its spectacular preservation of numerous fossils. Sediments of the Fur Formation crop out in Northern Jutland, Denmark, and consist of 60 m thickness of marine diatomite interbedded with over 180 volcanic ash layers.

- The fossil was found in 1986 by me and two students during a geology field course in the abandoned diatomite quarry Klovbakker on the Island of Mors. In the quarry I pointed to a 30-40 cm block of ‘cementstone’ that had fallen from the vertical wall, so that students could identify the ash layers in this laminated limestone boulder. The students saw the ca. 6 cm long, three-dimensionally preserved bird skull exposed on the surface of the boulder along with a few anterior neck vertebrae, just above ash layer +30. Two weeks later, when showing the fossil to a colleague, I noticed one claw on the opposite side of the boulder’s surface, and guessed that the rest of the skeleton should be lying in between under 3-4 mm limestone. I prepared one foot mechanically, and the remaining skeleton was prepared by Sten L. Jakobsen from the Geological Museum in Copenhagen, said Niels Bonde. 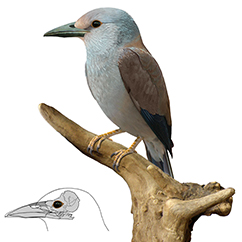 - Septencoracias is quite small compared to most living species of rollers. However, its skull is significantly larger than in other rollers, and is more similar in proportion to that of kingfishers and bee-eaters. In our life reconstruction, Septencoracias is represented with a brownish and bluish plumage, because brownish and/or bluish feathers occur in most species of rollers, and are probably primitive within the roller group, said Dr. Estelle Bourdon, the lead author of the paper, postdoctoral researcher at the Natural History Museum of Denmark.

The study also reveals that Septencoracias is the oldest substantial record of a large group of arboreal birds that includes rollers, kingfishers, bee-eaters, motmots, hoopoes, hornbills and woodpeckers.

Living rollers are restricted to the Old World, and all species occur in tropical to subtropical regions, except the European roller and the Dollarbird, which are also recorded in the temperate zone. The Fur Formation was deposited just after the Paleocene-Eocene Thermal Maximum, which is an intense and abrupt interval of global warming characterized by the highest global temperatures of the Cenozoic Era (66 million years ago to present).

The Early Eocene climate was tropical to subtropical in the Northern Hemisphere, as indicated by the Fur Formation fauna and flora. Our finding provides evidence that the rollers had a widespread northern hemisphere distribution in the Eocene, with subsequent restriction of the group to the Old World tropics and subtropics. This is consistent with a pattern found in numerous lineages of modern birds, in which groups now restricted to low latitude tropical environments were present in higher latitudes in the Eocene, when the temperatures were several degrees warmer than they are today.

This research was funded by the Carlsbergfondet.

Link to the article: A roller-like bird (Coracii) from the Early Eocene of Denmark