A new research project headed by Professor Minik Rosing from the Natural History Museum, University of Copenhagen, will investigate whether "glacial rock flour" from Greenland can revitalize degraded lands and prevent deforestation in the tropics, while creating new jobs in Greenland. The research project runs over 3 years and has just been granted 5 million dkk by the Novo Nordisk Foundation.

The Greenland ice sheet moves steadily across vast distances. In the process, the underlying rock is crushed and ground to a fine powder, called glacial flour, which is transported by the melt water and deposited as mud in the lakes and fjords. Over the past millennia vast amounts of this fine mud has been deposited along the coasts of Greenland - and more material is continously being produced.

Unlike many of Greenland's other raw materials, new material is constantly produced and it can be exploited without risk of damaging the environment. But noone has ever tried to investigate whether the glacial flour could be an interesting resource says Professor Minik Rosing from the Natural History Museum. 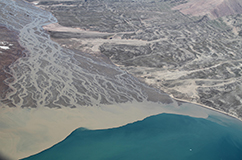 This is about to change. A new partnership between plant scientists, soil experts, geologists and industry in Greenland and Denmark and with threads so far as to researchers in Brazil will now investigate and uncover the potential of glacial rock flour. The optimistic and encouraging prediction is that there is a previously overlooked natural resource that holds a potential for becoming the basis for new business in Greenland, and which can help solve problems for the rest of the world.

The glacial rock flour contains a number of essential nutrients in a ratio that plants require. Scientists are now starting to examine how efficiently plants can utilize the nutrients

- The nutrients found in the flour are missing in tropical soils. The missing nutrients are the reason that vast areas of tropical rain forest is burned every year in order to release the small amount of nutrients contained in the trees. If our assumptions about the rock flour’s properties are correct we could avoid having to burn forest because the soil would instead be fertilized with Greenlandic mud, says Minik Rosing.

Earth's population is growing and therefore food production must increase significantly in the coming years if the whole world population are to be fed. It is a great challenge, which means a more intensive cultivation of the soil.

- One of the biggest crises facing the world, is food security: Being able to provide enough food for a growing population. We know that tropical soils are poor in minerals and nutrients, and it causes food shortages and malnutrition. We hope and believe that with this project we can contribute to solving this global problem, says Minik Rosing, adding:

And as an added bonus we can also show Greenland’s relevance to the rest of the world. 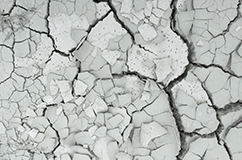 Preliminary calculations show that glacial flour can be extracted and transported sustainably and therefore without increasing CO2 emissions to the atmosphere. The project is still in its early stages, and researchers still need to investigate and answer a series of questions about the impact of the material and its ecological as well as economic sustainability.

The project is based at the Natural History Museum of Denmark, but it involves researchers from the Department of Plant and Environmental Sciences and Institute of Nano-Science at Copenhagen University and researchers from the Agricultural Research Institution Embrapa and Sao Paulo University in Brazil. In Greenland, the project is carried out in close cooperation with the Greenland company Usisaat and GEUS in Nuuk.