Dodos might have been quite intelligent, new research finds

A-ray scans reveal that dodo brain size was similar to pigeons, likely had had enhanced ability to smell.

New research suggests that the dodo, an extinct bird whose name has entered popular culture as a symbol of stupidity, was actually fairly smart. The work, published in the Zoological Journal of the Linnean Society finds that the overall size of the dodo’s brain in relation to its body size was on par with its closest living relatives: pigeons—birds whose ability to be trained implies a moderate level of intelligence. The researchers also discovered that the dodo had an enlarged olfactory bulb—the part of the brain responsible for smelling—an uncharacteristic trait for birds, which usually pump their brainpower into eyesight.

The dodo (Raphus cucullatus) was a large, flightless bird that lived on the island of Mauritius in the Indian Ocean. They were last seen in 1662. 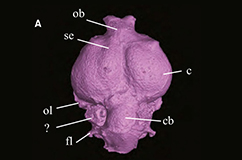 - When the island was discovered in the late 1500s, the dodos living there had no fear of humans and they were herded onto boats and used as fresh meat for sailors,” said Eugenia Gold, the lead author of the paper, a research associate and recent graduate of the American Museum of Natural History’s Richard Gilder Graduate School, and an instructor in the Department of Anatomical Sciences at Stony Brook University.

- Because of that and invasive species introduced to the island, they disappeared in less than 100 years after humans arrived. Today, they are almost exclusively known for becoming extinct, and I think that’s why we’ve given them this reputation of being dumb.

Even though the birds have become an example of oddity, obsolescence, stupidity, and extinction, and have been featured in popular stories ranging from Alice in Wonderland to Ice Age, most aspects of the dodo’s biology are still unknown. This is partly because dodo specimens are extremely rare, having disappeared during the nascent stage of natural history collections. 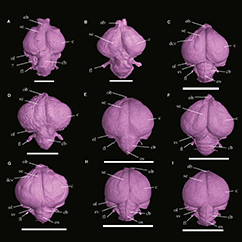 To examine the brain of the dodo, Gold tracked down a well-preserved skull from the collections of the Natural History Museum, London, and imaged it with high-resolution computed tomography (CT) scanning there. In the American Museum of Natural History’s Microscopy and Imaging Facility, she also CT scanned the skulls of seven species of pigeons—ranging from the common pigeon found on city streets, Columba livia, to more exotic varieties. Out of these scans, Gold built virtual brain endocasts to determine the overall brain size and the size of various structures. Gold’s colleagues at the Natural History Museum of Denmark and National Museum of Scotland sent her the endocast for the dodo’s closest relative, the extinct island-dwelling bird Rodrigues solitaire (Pezophaps solitaria).

When comparing the size of the bird brains to their body sizes, Gold and collaborators found that the dodo was “right on the line.”

- It’s not impressively large or impressively small—it’s exactly the size you would predict it to be for its body size, Gold said.

- So if you take brain size as a proxy for intelligence, dodos probably had a similar intelligence level to pigeons. Of course, there’s more to intelligence than just overall brain size, but this gives us a basic measure.

The study also revealed that both the dodo and the Rodrigues solitaire, which recently was driven to extinction by human activity, had large and differentiated olfactory bulbs. In general, birds depend much more on sight rather than smell to navigate through their world, and as a result, they tend to have larger optic lobes than olfactory bulbs. The authors suggest that because dodos and solitaires were ground-dwellers, they relied on smell to find food, which might have included fruit, small land vertebrates, and marine animals like shellfish.

- It is really amazing what new technologies can bring to old museum specimens, said co-author Mark Norell, Macaulay Curator of Paleontology and Chair of the Division of Paleontology at the American Museum of Natural History.

- This really underscores the need for the maintenance and growth of natural history collections, because who knows what’s next.

The researchers also discovered an unusual curvature of the dodo’s semicircular canal—the balance organs located in the ear. But as of yet, there’s not a good hypothesis for this atypical feature.

Estelle Bourdon, from the Natural History Museum of Denmark, also was an author on this study.

This research was funded by the American Museum of Natural History, the Macaulay Family Endowment, the National Science Foundation Doctoral Dissertation Improvement Grant #1311790, a Marie Curie Intra European Fellowship (no. 255039), and the Carlsbergfondet (no. 2013-01-0480).