A Hunt for the Greenlandic sled dog’s Soul

Greenland’s sled dog culture and technology are more than 4,000 years old. Without this dog the Greenlanders’ ancestors, the Thule people, would have found it difficult to colonise the new world in the Arctic region, and neither Robert Peary nor Roald Amundsen would have been able to conquer the North and South Poles. Today, the traditional knowledge of dog sleds, its technology and cosmology still exist in Greenlandic society. It can rightly be called the Greenlandic Sled Dog's Soul. But this knowledge has often not been written down, and now both the sled dog and the highly specialised knowledge are in danger of disappearing. That is why a new Danish/Greenlandic interdisciplinary research project has embarked upon a hunt for “The Sled Dogs’s Soul”. In close collaboration with the people of Greenland, researchers will chronicle the cultural significance of the sled dog and chart its genetic history.

Greenland is home to the largest extant sled dog population in the Arctic region and a sled dog culture, which is unique in the world. Nonetheless, both the sled dog and the highly specialised technology and knowledge associated with its training and use are in danger of disappearing. Ten years ago there were 20,000 dogs. Today there are 15,000, and the decline is continuing. This is due to a combination of: global warming, which means that the sea ice covers sea areas for increasingly shorter periods; the rising price of dog food; and competition from the snow scooter.

“Even though the Greenlandic sled dog and dog sled culture play a hugely important role in Greenland, and even though it is extremely interesting both scientifically and culturally, they have only received very limited documentation and research,” says Morten Meldgaard of the University of Greenland and the Natural History Museum of Denmark, which is heading the research project. He continues:

“That is why the greenlandic sled dog and its cultural history are both highly relevant and topical as an interdisciplinary research project, in which anthropology, archaeology, genetics and biology will work together to create a comprehensive, detailed picture of the dog’s history, origin, use and significance. 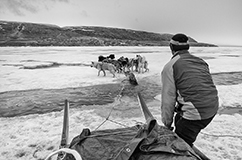 Citizen science, which, to put it briefly is science which involves ordinary people in the work of research, will play a crucial role in the hunt for the Greenland Sled Dog’s Soul. It will involve special collaboration with Greenlandic school classes, who will be invited to take part in the project, but the premise is that anyone with an interest, either in or outside Greenland, can contribute to the account of Greenland’s sled dog culture.

The research project, QIMMEQ - Greenland’s SLed Dog will involve a total of thirteen museums and three universities. This joint initiative will be coordinated by Professor Morten Meldgaard in a secretariat located at Ilisimatusarfik, the University of Greenland, in Nuuk.

In addition to the citizen science initiative and two PhD projects (one outlining the cultural importance of the sled dog; the other charting its genetic history), the project will also involve a number of annual dog sled workshops in Sisimiut. The workshops will take a close look, for example, at initiatives that can help ensure sustainable development of the sled dog culture in Greenland.

The first workshop will take place in Greenland in late 2016. 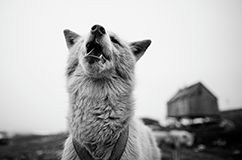 Dissemination of the research project and its results will also be implemented through the likes of new films and photographs and the establishment of a peripatetic exhibition. The exhibition will be curated by Sisimiut Museum and the Natural History Museum of Denmark in collaboration with the Greenlandic local museums in Tasiilaq, Ilulissat, Qasigiannguit, Maniisoqm Paamiut, Nanortalik, Aasiaat, Qaqortoq and Narsaq, and with Naturama and the House of Knud Rasmussen in Denmark.

THE VELUX FOUNDATION and the Aage and Johanne Louis-Hansen Foundation are supporting the project to the tune of DKK 4.5 million and DKK 2.1 million respectively.