An international team of researchers including Hannes Schroeder, Marcela Sandoval Velasco, Lasse Vinner and Tom Gilbert from the Natural History Museum of Denmark has sequenced the first complete genome of an Iberian farmer, which is also the first ancient genome from the entire Mediterranean area. This new genome allows to know the distinctive genetic changes of Neolithic migration in Southern Europe which led to the abandonment of the hunter-gatherer way of life. The study is led by the Institute of Evolutionary Biology, a joint center of the Spanish National Research Council (CSIC) and the Universitat Pompeu Fabra (Barcelona, Spain), in collaboration with the Centre for GeoGenetics in Denmark. The results are published in the Molecular Biology and Evolution journal. 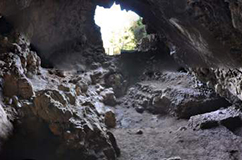 The first farmers entering Europe about 8,000 years ago coming from the Near East spread through the continent following two different routes: one to Central Europe via the Danube, and the other towards the Iberian peninsula following the Mediterranean coast. These latter farmers developed their own cultural tradition: the Cardium Pottery, so-called due to a characteristic incised decoration made with the edges of bivalves shells belonging to the genus Cerastoderma (formerly Cardium).

So far, only genomic data of various individuals belonging to the inland route found in Hungary and Germany were available, but the complete genomes of the Mediterranean route were lacked. This is partly due to the climatic conditions in Southern Europe, which hinder the conservation of genetic material. 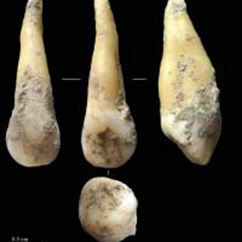 The research team, led by Carles Lalueza-Fox from the Institute of Evolutionary Biology, has sequenced the complete genome of a Neolithic woman from a tooth dated in 7400 years and from the cardial levels of the Cova Bonica cave in Vallirana, near Barcelona.

This site is being excavated by a team from the University of Barcelona, led by Joan Daura, Montserrat Sanz, Mireia Pedro, Xavier Oms and Pablo Martinez. Also, they have recovered partial genomic data from three other sites: Cova de l'Or (Alicante) and Cova de la Sarsa (Valencia) in Spain, and Almonda (Portugal).

Thanks to this new genome, researchers have been able to determine that farmers from the Mediterranean route and the inland route are very homogeneous and clearly derive from a common ancestral population that, most likely, is that of the first farmers who entered Europe through Anatolia. 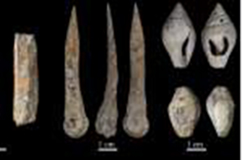 According to Iñigo Olalde, first author of the work, "the sequencing of this genome has been possible thanks to new advances in both techniques of ancient DNA extraction, building of and construction techniques of genomic libraries and massive sequencing; from an experimental point of view, it has been quite challenging".

Analysis of the genome from Cova Bonica has allowed to restore the appearance of these pioneer farmers, who had light skin and dark eyes and hair. This contrasts with previous Mesolithic hunters who, as the man from La Braña in León (Spain) -recovered in 2014 by the same researcher team-, had blue eyes and a darker skin than current Europeans. Both individuals are only separated by 600 years and 800 kilometers; however, they are very different from a genetic -and physical- standpoint. Modern Iberians mostly derive from these farmers, but Sardinians and Basques are the current populations that preserve the farming genetic component to a larger extent.

For Carles Lalueza-Fox, "this study is only the first step of a major project done in collaboration with David Reich at the Broad Institute that aims to create an Iberian paleogenomic transect, from the Mesolithic to the Middle Ages. So far, we have genomic data from fifty individuals and we want to reach more than one hundred. Being at the westernmost edge of Europe, the Iberian Peninsula is crucial to understand the final impact of population movements such as the Neolithic or the later steppe migrations that entered Europe from the East".

Read the article in Molecular Biology and Evolution.