The Natural History Museum of Denmark recently discovered a unique gift from one of the greatest-ever scientists. In 1854, Charles Darwin – father of the theory of evolution – sent a gift to his Danish colleague Japetus Steenstrup, director of the Royal Museum of Natural History. Until very recently, no one at the museum knew that it possessed a piece of scientific history of this calibre. Just a few weeks ago, the head of exhibitions was studying the correspondence between Steenstrup and Darwin as part of her search for objects to include in an upcoming exhibition. She started to suspect a treasure lay hidden somewhere, and soon a hunt was launched among the museum’s 14 million objects. 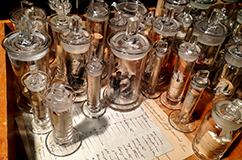 In about six weeks, the museum will open its biggest-ever exhibition. Denmark’s new giant dinosaur “Misty” is the star of the show, but the exhibition will also present a range of the very best objects from the museum’s vast collection. Head of Exhibitions Hanne Strager has long been on the hunt for something particularly special among the museum’s millions of items.

- We knew about the relationship between Steenstrup and Darwin. They corresponded with each other, and we know that Steenstrup lent Darwin cirripedes – a family of small crustaceans. We dreamed that one day we would find an object that Darwin had borrowed from Steenstrup, which had then been returned to Copenhagen – something that we could say Darwin had studied personally. But we found something much better, Strager explains.

Darwin not only returned the barnacles, he also sent a box of 77 other carefully selected species of cirripedes to Steenstrup by way of thanks. Hanne Strager found this out by chance while studying their correspondence. In his letter, Darwin described a list of the 77 species, but according to the Darwin Correspondence Project the list of the 77 species has not been located.

- We thought that there was a possibility that the list was among Steenstrup’s papers in our archives – and there it was! It was just a plain hand written list with numbers and scientific names, and had we not read the letter, we would never had known what it was.The text was very difficult to decipher, and it took a while to transcribe the list, but then things really took off. Very soon, we had found most of the specimens, she says.

- The chance to exhibit a personal gift from one of the world’s greatest scientists is something quite unique. This is an exhibit with a personal link to the man behind what is perhaps biology’s greatest breakthrough: the theory of evolution. Not that it was perceived that way in the days when Steenstrup received his gift.

Darwin sent it before On the Origin of Species was published, so before the theory of evolution was on everyone’s lips. Instead of keeping the 77 specimens in one place, they were divided into scientific categories and spread around the museum’s collections. It made perfect sense at the time, although in retrospect we might see it differently, Strager continues.

She promises that Darwin’s gift will be prominently displayed when the new exhibition opens on 1 October.

Not all of the 77 species were found. Some of the specimens from a particular genus are missing. We can only guess that they were borrowed at some point in the last 160 years, but no one knows why or when.

“Maybe researchers working on the specimens just didn’t return them. And there is a very good chance that they were completely unaware that what they were working on was a gift from Darwin,” Strager says.

1 October sees the opening of the exhibition, Precious Things, at the Zoological Museum, part of the Natural History Museum of Denmark. Here visitors will see the dinosaur “Misty”, the gift from Darwin, the skull of a dodo, and many other beautiful, fascinating and unique natural history objects.

The photos on this site must be used in conjunction with media coverage of the story. Click on the photos to download them in high resolution. Please credit the photographer and the Natural History Museum of Denmark.