NASA’s Kepler spacecraft has confirmed the existence of over 1700 planets outside our solar system – so-called exoplanets - that range in size from small rocky planets to gas giants. Despite what appears to be a continuum of sizes, new research reveals that these alien worlds can be divided into three distinct groups according to the central star’s composition. This implies that planet formation – and, therefore, the types of planets to form - is influenced by the starting composition of each stellar system. The results of this study are reported in the journal Nature.

The international team of scientists, led by Lars Buchhave and Martin Bizzarro from the Centre for Star and Planet Formation at the Natural History Museum of Denmark, University of Copenhagen, measured the amount of elements heavier than hydrogen and helium - which astronomers collectively call metals - in stars with exoplanet candidates. Since a star and its planets form from the same disk of material, the measurable metallicity of a star reflects the composition of the protoplanetary disk from which the planets formed. 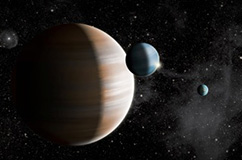 The team analyzed spectra for more than 400 stars hosting over 600 exoplanets. Using a statistical test, they found that the sizes of the planets fell into three natural groups according to stellar metallicities.

In detail, they found two dividing lines – one at a size 1.7 times as large as Earth and the other at a size 3.9 times larger than Earth. By comparing available data of planets in this size range, the authors infer that these boundaries mark changes in composition of the observed exoplanets. Planets smaller than 1.7 Earths are likely to be completely rocky, while those larger than 3.9 Earths are probably gas giants.

Planets between 1.7 and 3.9 times the size of Earth were dubbed gas dwarfs since they likely have thick atmospheres of hydrogen and helium. The rocky cores of gas dwarfs formed early enough to accrete some gas, although they did not grow as large as gas giants like Jupiter.

Collectively, the new analysis implies that small rocky planets are more likely to form around low metallicity stars and gas giants are more likely to form around high metallicity stars. The authors are quick to point out that other factors must also influence planet formation to account for the wide spread of planet sizes observed for any given metallicity. For example, our solar system lacks the existence of gas dwarf planets, although these are the most abundant types in our surveys of the galaxy.

- The absence of gas dwarfs could reflect the early formation of Jupiter, which prevented significant inward migration of the material required to fuel the formation of these strange worlds, speculates Prof. Bizzarro, head of the Centre for Star and Planet Formation.