DNA recovered from a 36,000 year old fossil skeleton found in Russia shows early divergence of Eurasians once they had left Africa, and the deep shared ancestry of Europeans. The new study, carried out by an international team of researchers, also reveals when Neanderthals and early modern humans out of Africa interbred - around 54,000 years ago, before the modern human population began to differentiate. The study was led by the Centre for GeoGenetics at the University of Copenhagen, in collaboration with scientists from several institutions, including Cambridge, UC Berkeley, Griffith, Texas A&M, California San Francisco, and the Peter the Great Museum of Anthropology and Ethnography (Kunstkamera) RAS. 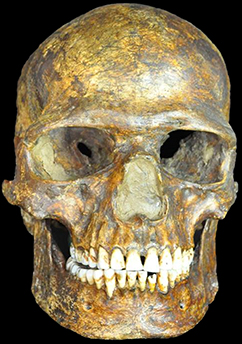 Ancient DNA, recovered from one of the earliest known Europeans, now provides unique insights into the history of the continent. The complete genome of an individual who died more than 36,000 years ago at the site of Kostenki 14 (also known as Markina Gora) in westernmost Russia was recovered and sequenced. The Kostenki 14 genome shows that once people had dispersed beyond the African homeland into Eurasia, they separated early - before 36,000 years ago - into at least three populations whose descendants would develop the unique features that reflect the core of the diversity of non-African peoples.

Since then, despite major fluctuations in climate, one of these groups - Palaeolithic Europeans - persisted as a population, ebbing and flowing by moments of contraction and expansion, but persisting intertwined until the arrival of farmers from the Middle East in the last 8,000 years, with whom they mixed extensively.

- What we can see from Kostenki and other ancient genomes is that for 30,000 years there was a single meta-population in Europe. These Palaeolithic hunter-gatherer groups split up, mixed, dispersed and changed, and through ancient genomes we can trace the genetic thread of their shared ancestry. 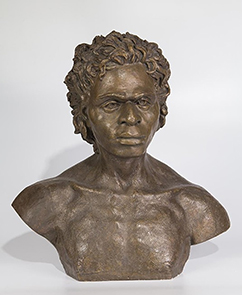 Martin Sikora and Ludovic Orlando from the Centre for GeoGenetics in Copenhagen add:

- For example, the genome reveals that the people from Kostenki contributed genes to the ancestors of the boy from Mal’ta, who lived in Siberia 26,000 years ago, and whose descendants spread as far as Europe and the Americas.

- It is not just a question of who they were, but what it tells us about how they lived. That there was continuity from the earliest Upper Palaeolithic to the Mesolithic, across a major glaciation, is a great insight into the evolutionary processes underlying human success.

It was only when farmers from the Near East arrived about 8,000 years ago, that the structure of the European population changed significantly.

The genome of the man from Kostenki held other secrets as well. One of these is that, like all people of Eurasia today, his genome included a small percentage of Neanderthal genes. This confirms earlier findings which showed that early in the human colonisation of Eurasia there was an isolated admixture event with the Neanderthals. But being that much closer in age to the event, the Kostenki genome throws new light on this.

Professor Rasmus Nielsen from the University of California at Berkeley explains:

- Kostenki 14 actually has a slightly higher percentage of Neanderthal genes than ever observed before, and the genetic fragments that the man from Kostenki inherited from a Neanderthal ancestor are larger, not yet broken by the thousands of natural recombination events that have occurred since. This allowed us to estimate the time of human-Neanderthal admixture to 54,000 years ago.

But that is not all. A portion of the Kostenki genome was not passed on to Palaeolithic Europe, but is instead found in the population from the Middle East who brought farming and a lighter skin colour to Europe 30,000 years later.

- This unique element of the Kostenki genome confirms the presence of a yet unmapped major population lineage in Eurasia. That population separated early on from the ancestors of other Eurasians, both Europeans and eastern Asians. 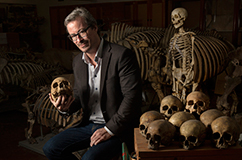 Identifying the fossil and archaeological remains that map the evolutionary history and adaptations of this population is now a major challenge.

- Ancient genomes add a time and space stamp to our genetic history. Recovering the whole genome, rather than just small fragments as happened in the past, adds the power of genomics. This reveals the complex web of population relationships in the past, generating for the first time a firm framework with which to explore how humans responded to climate change, encounters with other populations, and the dynamic landscapes of the ice age.

Centre for GeoGenetics
University of Copenhagen

Centre for GeoGenetics
University of Copenhagen