More Earth-like planets in the galaxy

It had previously been thought that planets were more likely to form around stars with a high content of heavier elements. But a new study led by researchers at the Centre for Star and Planet Formation shows that small planets can form around very different types of stars including those that are relatively poor in heavy elements. This significantly increases the likelihood that Earth-like planets are widespread in the universe. The results have been published in the scientific journal, Nature. 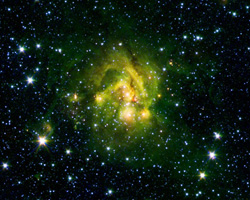 There is a natural evolution of stars forming through time with increasing abundances of heavy elements. This reflects the production of heavy elements in stars, the dispersion of this material as the star dies and the incorporation of these elements in next generation stars.

Planets are formed from the remnants of the clouds of gas and dust that rotate in disc around the newly-formed star. In this protoplanetary disc, the elements begin to accumulate and clump together and slowly the planets are formed. In the later generations of stars with a high content of heavy elements, the rotating disc of dust and gas particles has an elemental composition that favours the formation of gas giants like Saturn and Jupiter.

With a theoretical understanding of large planet formation, a research team led by Lars A. Buchhave and Martin Bizzarro at the Centre for Star and Planet Formation tackled the outstanding question of whether special conditions promoted the formation of smaller planets.

“We have analysed the spectroscopic elemental composition of the stars for 226 exoplanets – planets outside our solar system. Most of the planets are small, corresponding to the solid planets in our solar system and up to four times the Earth’s radius. We have discovered that, unlike the gas giants, the occurrence of smaller planets is not strongly dependent on stars with a high content of heavy elements. Planets that are up to four times the size of Earth can form around very different stars, including those that are poorer in heavy elements,” says Lars A. Buchhave.

The Centre for Star and Planet Formation director Professor Martin Bizzarro underscores the most important conclusion of the paper: “That Earth-like planets could have formed earlier and be more numerous than previously believed in our galaxy”. This conclusion resonates well with the picture that is emerging from other observational studies of the distribution of small planets in our galaxy, namely that it seems more the rule than the exception that a star has small planets orbiting them.

The article in Nature >>