Video: The film is in Danish only.

FLOWER SENSATION. In 2003, the Botanical Garden in Copenhagen was given a very special plant, Amorphophallus titanum, by the Bonn’s Botanical Garden. After nine years, the plant is now blooming, and this is the first time ever that anybody has managed to get the plant to bloom in Denmark. The public will now have a unique opportunity to follow the rare inflorescence that can grow to a height of three metres and has a very characteristic smell of carcasses when it opens. 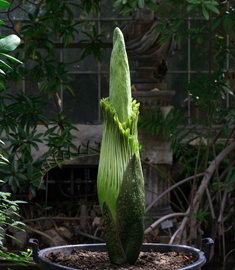 An earlier stage of the very special plant Amorphophallus titanum in its right element in the Botanical Garden's Palm House. The last few days, the plant has grown up to 10 cm. per day. Photographer: Rasmus N. Abbey.
Click on the image to see it full size.

The plant is found in the Botanical Garden, Copenhagen (house one in the Palm House with mangrove/aquatic plants), where admission is free. The Palm House is extraordinarily open from 10:00-18:00 until the 27th of June.

The flowering lasts only a few days and is expected to occur at the end of this week, but in the days before and after the plant will undergo a very fascinating process which is also worth following.

- I got the plant shortly after I began working in the Botanical Garden back in 2003, and ever since I have cared for it with great attention. It's a big surprise to me that it will flourish already now - as a greenhouse gardener it’s the closest thing to getting an Oscar, says greenhouse
gardener Rasmus N. Kloster, Botanical Garden.

The gigantic plant grows in Sumatra, Indonesia. It was discovered in 1878 by the Italian botanist and explorer Dr. Odoardo Beccari. The plant is known for its colossal inflorescence and especially its strong smell of carcasses. The stench has led to the flower being called the Corpse flower because it statably smells like rotten meat. The pungent smell is meant to attract pollinating insects, and if pollination is successful, the inflorescence will be filled with orange-red berries at the size of cherries.

Movie above: Around noon on the 21st of June 2012 Amorphophallus titanum began his amazing transformation and opened up in full bloom in approx. 12 hours in the Botanical Garden's Palm House. The time-lapse movie is composed of photos taken by 4-9 min. intervals which tells you something about how fast it happens.

Amorphophallus titanum is difficult to cultivate as it requires a very precise watering and an environment where there are high ceilings, high temperature and high humidity. It may be many years before the plant flowers, and the flowering lasts only a few days. The flower is only fully open the first 12 hours of flowering. In other countries, the flowering attracted much attention and many visitors. 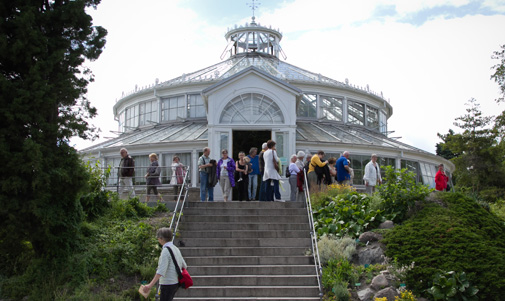 The plant Amorphophallus titanum can be seen in the Botanical Garden's Palm House which also contains other rare tropical and subtropical plants. Photographer: Birgitte Rubæk.

Click on the image to see it in full size. 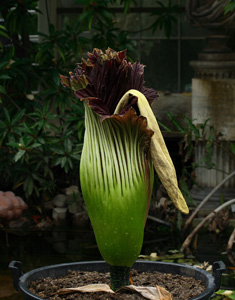 The plant is slowly fading away.

In the morning on the 27th of June, the centre of the plant collapsed, and the inflorescence will do the same within 14 days. The plant is pulling all the nutrients out of the inflorescence down into the root again to ensure its own survival. It needs as much energy as possible in order to produce a new leaf.

During Saturday the 23rd of June, the plant stopped smelling. The stench peaked Thursday evening the 21st of June when the plant was in full bloom.

We estimate that up to 15,000 visitors have walked through the Palm House in order to see the plant and follow its great development and decay.

The greenhouse gardener has taken pollen from the plant which can be frozen and distributed to other botanical gardens around the world.